Michael and Ginny Hostetler, mentioned below, are long-time friends of mine. We three first met as teenagers and fellow collegians at Eastern Mennonite University in Virginia, where Mike and I graduated together, 35 years ago - Ginny a year later. See below a report on the 10th anniversary celebration of a very significant work they helped initiate in Nazareth, Israel. As noted in that article...
"Nazareth Village welcomed nearly 41,000 visitors in 2009 from many countries around the world. This hillside village attracts people of all faiths from more than 75 different countries, making it a uniquely international place. It continues to be a popular site for field trips from local school children. More than 45,000 - roughly 85% Moslem - children have come to theVillage since it opened."
Much more information at the NV website. And if you ever travel to Palestine/Israel you won't want to miss visiting this educational centre - now quite significant to several major religions.
-Clair

A rhetorical question? Not really.

In John 1:46, Nathaniel made that inquiry, and Jesus’ disciple Philip answered, “Come and see . . .”

Since the year 2000, people have come to the heart of Nazareth, Israel, traveling back in time to the very place where Jesus walked, talked, healed and changed the course of history.

The place is Nazareth Village, an authentic restoration of a farm and village as it would have existed in the first century. The project occupies about six acres of land adjacent to Nazareth Hospital. 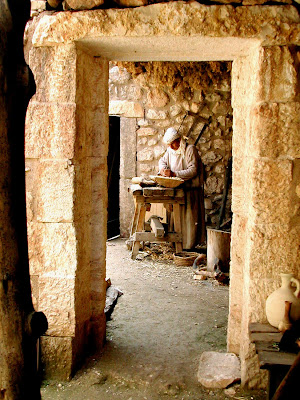 Nazareth Village describes itself as “a living presentation of the life, times and teachings of Jesus of Nazareth for all the world.” Visitors can take guided tours that include homes, workshops, a synagogue, working olive press and first-century wine press and stone quarry. They can observe carpenters plying their trade and herdsmen tending their flock
while hearing Jesus' teachings and parables told as the Man of Galilee would tell them.

Saturday evening, Feb. 28, some 230 supporters and friends of this extraordinary venture that marked its 10th anniversary this year, gathered in the Eastern Mennonite High School dining hall to hear an update on the project and to savor a first century meal.

The evening speaker was Dr. Nakhle Bishara, a physician and medical director of Nazareth Hospital, 1988-2006, now working in risk management at another hospital in Nazareth. A ninth-generation Nazarene and member of the Greek Orthodox Church, he was a founding board member of the Village and continues in this capacity today.

In 1994, Bishara shared his dream of turning the dry, dusty stones of Nazareth into living stones with freelance writer-photographer team Ginny and Mike Hostetler who were at the hospital working on a video project. He was passionate about wanting to share the stories of Jesus with the thousands of tourists that come to Jesus’ home town each year.

Nearly a year later, Bishara heard from Hostetler: “I’m coming back to Nazareth and I need a place to stay for a week – and I’m bringing 11 other people with me.”

That group of volunteer consultants from the US and the British Isles consulted with Christians from throughout the Middle East on a feasibility plan.

In 1995, the Edinburgh (Scotland) Medical Missionary Society, which operates Nazareth Hospital and owns the desired land, reacted favorably to a presentation by Hostetler and Bishara and granted seed money for the project.

A year later, Hostetler, with assistance from Mennonite Board of Missions (now Mennonite Mission Network), moved with Ginny and their two young children from the US to Nazareth to lead the project. He would become the first director of Nazareth Village. The project opened the fall of 2000 even while the development moved forward.

Dr. Bishara addressed the group of supporters on the parable of the lost son from Luke 15, telling it from a first century point of view as Christ would have told it in that cultural setting.

The primary point of the story, Bishara said, is that of “heavenly justice, full of mercy and compassion – the lost has been found and there is great rejoicing in the process of restoration. In this amazing story we are assured that God watches out for the lost and welcomes them back with open arms.”

Nazareth Village, which marks its tenth anniversary this year even as staff continues to develop the project, operates under the auspices of an ecumenical, international board of directors. Shirley P. Roth, a native of Big Valley, Pa., has been executive director of the Village since 2005.
"Nazareth Village welcomed nearly 41,000 visitors in 2009 from many countries around the world, Shirley reported. "This hillside village attracts people of all faiths from more than 75 different countries, making it a uniquely international place. It continues to be a popular site for field trips from local school children. More than 45,000 - roughly 85% Moslem - children have come to the Village since it opened," she noted.
One of the most delightful experiences of 2009 was a visit from a delegation and families of the Druze people of northern Israel, Shirley said, noting that there are about one million Druze living mainly in Syria and Lebanon. The Druze community in Israel is officially recognized as a separate religious entity with its own courts and spiritual leadership.

The group took the Christmas tour in the Village with participation of Village staff and volunteers who played out scenes from the Nativity, followed by a first century meal together.

"It proved immensely popular," Shirley said. "There were 34 Druze leaders in the first group, and because of their approval of the experience, about 40 members of Druze families with children followed a few days later. The sheiks expressed their deep appreciation after the tour.

"These kind of inspirational and incarnational moments keep repeating themselves at the Village," she said.

Information on Nazareth Village is available at the www.nazarethvillage.com web site. A colorful, profusely-illustrated book, The Nazareth Jesus Knew, which describes the project from inception to the present, can be ordered from NehemiahGr@aol.com.

"God is calling us to this unique and powerful ministry - offering light, hope and new understandings of Jesus' teachings to all who come from different faith backgrounds in the midst of a region beset by turmoil and uncertainty," Shirley said.