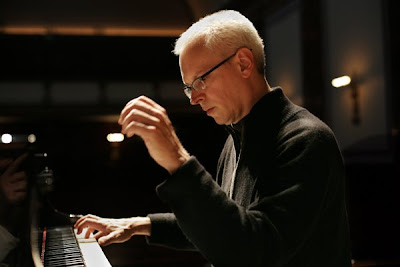 Friends in the Goshen area...

I received word this past weekend from my Aunt Jan from Columbus, Ohio, regarding a (free) concert by a world class pianist to be held at Sauder Hall at Goshen College the evening of June 18. The pianist is Mark Swartzentruber, her son (and my first cousin, because he is my mother Edna's brother Paul's son) who has lived in London, England many years and raised his family there.

Mark teaches music and helps make sound tracks/film scores with Franco Zeffirelli, etc, and performed at many major music venues throughout Europe and the Middle East. See the press release below for more about that and some other interesting details regarding his upcoming master classes at Goshen College and the evening concert being offered in connection with that.

Here is a link to a site containing some of the clips of his pieces (some are full length) which are sprinkled throughout six CDs he has recorded so far. All are available from his own music label, Solo Records.

Also, a search on Amazon using his name reveals over seventy different piano pieces he has recorded, which can be previewed or individually purchased there.

I am VERY disappointed to have to miss this concert and hope some of you might be able to enjoy it -- or the other one he's doing in Columbus Ohio the following evening. (I'm hoping they will be able to make a video or DVD copy that can be sent to me in Australia.)

Mark Swartzentruber will be performing at Goshen College on June 18, 7:30 p.m. in Sauder Hall. After teaching master classes on Tuesday and Weds he will perform on Wednesday evening. The concert is free and open to the public.

On Thursday, June 19, Mark will be performing at the Worthington Methodist Church in Worthington (across from the Post Office on High St.) This concert will benefit the Peggy McConnell Worthington Arts Center which will have the ground breaking ceremony on Saturday, June 21. The tickets for this event are $25 and the proceeds will go toward the building of this facility.

Mark graduated from Worthington High School and Indiana University School of Music and is now living in London, England with his wife and three children.

Mark Swartzentruber’s solo recordings on Sony and Solo Records have all won critical acclaim in the international music press. He has performed throughout Europe and in the United States and the Far East and has appeared regularly in recital in important London venues including Wigmore Hall, the South Bank’s Queen Elizabeth Hall, the Purcell Room and St. John’s Smith Square. He has broadcast on BBC Radio 3, Radio 4 and Classic FM and enjoys chamber music partnerships with pre-eminent string players including the Allegri String Quartet and members of the Raphael Ensemble.

He is Music Director of the Holloway Arts Festival in London and has worked with directors such as Franco Zeffirelli and Richard Eyre developing and performing music soundtracks for London West End productions. A committed teacher, he is regularly invited to give master classes and to adjudicate competitions.

‘His classically honed but never inhibited account of the Appassionata is one of the best I’ve heard.’ – BBC Music Magazine

‘Few pianists have offered such transcendental pages with greater honesty or coherence.’ – Gramophone

‘His playing leaves you once more in awe of Debussy.’ -- Gramophone