They say my theology is 'bent - but don't ignore this uni-fying strategy for maintaining a healthy "balance!"

Three years ago, soon after travelling the yellow brick road all the way to Oz - and spite of friends like Ann (who touts those wonderful Spiderflex seats for the traditional push bike) I converted to this pre-owned 'bent (recumbent) version of human-powered vehicle for travelling around. (Yes, with two "ll"s.  That is how they spell it here in the land of Oz.  And, by the way, in normal conversation here they don't ask how it's going - they ask "How are you travelling?)  Quite well now - thank you! 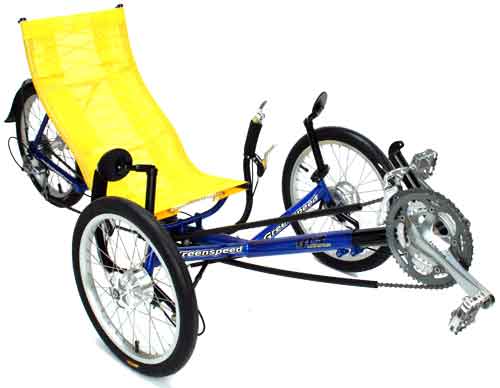 Yes, I experienced a true conversion to the Greenspeed GT and have never looked back. (Though I do use mirrors!)  My tadpole trike - with two wheels in front that steer with one wheel in back - means no more hunched and aching shoulders! There are numerous other advantages to pedaling in alternate realities. Allow me to expound.

For example, whether I take my "flying furniture" right into the midst of an open-air concert - or pause to smell the roses - the result is the same: I'm already sitting there in my exotic lawn chair with built-in foot/leg rests and bottle of drink, instantly enjoying the show without having to unpack a thing! (In fact, I did so just last Sunday evening, resting in the...Lord, it was a fabulous two-hour Canberra Symphony Orchestra concert right there in the middle of Commonwealth Park!)

There are several other advantages, including a significant increase in the efficient use of High-Spirited power - leg power, that is...  To be honest, being in 'bent mode means going a bit slower up hills - but you don't get near as tired. And I'll level with you, it's like greased lightning going downhill fast, because there is much less wind resistance (even without a cowling!)   Did you know that 'bents were banned from conventional bike races, because they started winning all the big races before the ban?!

And you never tip - no need to put your foot down in disgust.  Except this tip might help:  Since 'bent trikes are swinging low like a sweet chariot, it's a good idea to run up a flag as a survival tactic.  Get something orange or florescent green or some other "pillar of fire" right up there - blazing in the eyes of vehicle drivers to ensure they grant you sufficient bearth in the bike lane!

And oh, it's great for relationships!  I've felt quite welcome as a member of a comfortable congregation of 'bent lovers here in Canberra, the ACT branch of OzHPV - Australian Human Powered Vehicles. I don't get to all of them, but there are monthly spins around the lake for social and physical support, and general revival of the spirit, and other spontaneous "special" experiences that tend to warm the heart. 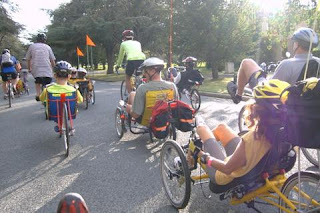 That's a sample from among the many in the photo collection of our "mob" as we refer to it (though traditionally, in Australia, that's the official nomenclature for a group of kangaroos!)  But it's the context for my "sitz im leben."  Indeed, it can be a very spiritual experience -- feeling all grounded and relaxed while in full control, watching nature glide past while physically in a unique position to fully experience that laid-back Aussie approach.  No (back or shoulder) strain, just a lot of gain:  enjoying a very "balanced" conversation with each other, and a great sense of connection and group identity.  No time to worry about or even notice those typical isolating stares that tend to come when travelling alone - yes, there is real strength in numbers!

I've disengaged from the journeys of all those dualistic traditional wheelers who push themselves around in all their "conventional" wisdom, enduring their neck and back strains.  Instead these days I enjoy a wildly syncretistic experience, alternating between my (Trinitarian) laid back three-wheeler and my upright (Unitarian) version - see the photo on the right.  I literally hop on it when I choose to exercise (my options) in a well-balanced and unifying mode - though it is indeed a bit more challenging.

There is one drawback, however, in regards to the later. One must be prepared for some fall-out.  And some traditionalists deem uni-cycle riders to be members of a very weird sect with an oft-misinterpreted agenda. To specifically illustrate the level of "persecution" one must be prepared to tolerate if choosing this version of faith in the unimodal method, I'll share this link to a most enlightening excerpt from a recent Colbert Report titled "The Enemy Within!"  (a sarcastic sampling from the most hellish array of prejudicial and sarcastic invective a uni-cyclist might ever expect to endure!)

So now you know the truth that has set me free!  It also helps explain why on the 29th of February 2008 Carole Anne and I "leaped" ("lept?") out of America to cross the Big Pond and landed in Australia.  Yes, though I once was a lost sole (uni-cyclist) floundering on the flatlands around Goshen Indiana, now I truly see the light!  This laid-back mob in Oz has extended lotsa inclusive grace toward Dualists and Trinitarian-wheelers alike -- and even a Uni-fied bloke like me.  Come and see; come and see:  http://www.ozhpv.org.au/stategroups/act/act.html