I hope sharing this story far and wide will help the people understand that most Palestinians are not "terrorists," that a substantial portion of the Arab population there are Christians, and that in any case there are many good examples locally where - in spite of all the oppression the population has to sustain - mutual respect and inter-faith relationships are valued and flourish!  Witness the following as a good sample of what most tourists to Israel from other parts of the world rarely get to see or experience -- a great story to enrich one's own understanding especially THIS Christmas season!   -Clair 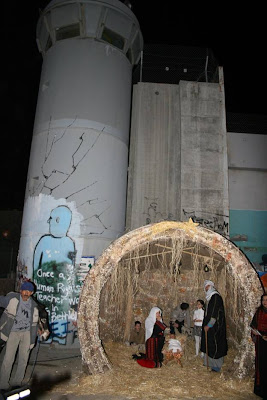 Bethlehem, Tuesday 20/12/2010
This scene is the Arab Educational Institute holding a Nativity scene in front of the Separation Wall and the military watchtower near Rachel’s Tomb in northern Bethlehem, Palestine. To the left is the shepherd and a donkey. On the watchtower is written: “Once a Teacher of Human Rights was born.” During the occasion, the girl standing in the grotto sang “Silent Night, Holy Night”, while the women’s choir of the Arab Educational Institute performed Christmas and national songs.

Prayers for peace were pronounced that had been coming in through a Christmas appeal to send wishes and prayers to Bethlehem - an initiative of Pax Christi, the Palestine Israel Ecumenical Forum of the World Council of Churches, Church and Peace, the International Fellowship of Reconciliation, the Presidency of the Conference of European Justice and Peace Commissions, the Asian Center for the Progress of Peoples, and the Commission for Justice, Peace and Integrity of Creation USG/UISG Secretariat.

The celebration was attended by some 150 civilians, including the mayor of Bethlehem, delegates of the Palestinian Ministry of Education in Ramallah and Bethlehem, dozens of Palestinian teachers and representatives of churches and mosques also from the Bethlehem and Ramallah areas. There were further a visiting group of IKV Pax Christi (a peace movement from the Netherlands), and human rights observers of the Ecumenical Accompaniment Program for Peace in Palestine and Israel (EAPPI).


The scene preceded an occasion of the Arab Educational Institute in which Human Rights Day (Jesus as human rights activist), Teacher’s Day (Jesus as teacher), and Christmas were jointly celebrated with speeches of dignitaries, readings from the Bible and Koran, and Moslem and Christian poetry.
For more information go to: www.aeicenter.org
at Thursday, December 23, 2010