Rule #1 for Unicyclers - Learn to Land on Your Feet!

Things are going fairly well lately for me here in Canberra, from a professional point of view. But, like everyone else, life does have its moments!

The highest official in the health system of this region is Katy Gallagher, the Minister of Health of the ACT (Australian Capital Territory.) She initiated a visit to The Canberra Hospital's Auxiliary and also the Pastoral Care department on Wednesday this week, for about an hour. I had received word of this the week before. Wow - that generated a bit of excitement! The Minister of Health , wanting to have "Morning Tea" with me and our pastoral care staff and volunteers (and the hospital auxiliary leaders) then a tour of our department's facilities. This sort of thing had NEVER happened before, but apparently she was personally interested in pastoral care.

The thing is, I then managed to take quite the spill last Sunday evening right at dusk while riding my Big Wheel during one of my "explorations" - this time over at the Tuggernong shopping complex. For those of you who don't know what a Big Wheel is, it has a 36" diameter rim with about 2" of rubber tire surrounding it, thus making it a 1 metre high wheel altogether. It's very BIG and heavy and fast and can develop a lot of momentum - a whole different "animal" to ride compared to my "regular" 24-inch wheel. Though I've now got the "red Ferrari version" I'm still getting used to it, a fact that will soon become apparent!
My wheel was rolling slower at that point without sufficient momentum to negotiate a couple of paver bricks pushed up by a tree root, which I didn't see because I was looking for an airhose outlet when approaching the Shell service station over there. My years of riding caused me to instinctively try to land on my feet first, but the extra height and centrifugal force slammed my body to the asphalt beyond the sidewalk in a fraction of a second. My gloved hands and arms took the brunt, and the other protective clothing and helmet saved the day and a few other precious parts - somewhat. But all I actually remember is that pavement coming up awfully fast and hitting me in the head, stunning me for a moment.

As I collected myself, checking to see whether anything on me was broken, I did a little self talk: "I can't let this experience intimidate me. Get right back up there and ride this thing back home!" I did. All three kilometers, while feeling the blood dripping down the side of my head, not to speak of feeling really bummed out because that service station, the only one still open in the whole area, had no air - and no public restroom. Well, at least Clair de L'uni would live to ride again!

The worst damage was to my pride. I can count on less than one hand the number of times in my 45 years of riding uni that I had really hurt myself, but this incident was probably the ugliest and definitely the most embarrassing. My glasses somehow survived the crash quite well, once I bent the temples back to the right angle. I had a busted watch crystal and some very "angry-looking" road rash around my left eye socket and nose and on my right wrist.
Once I reached home and Carole Anne got over the shock of how I looked, I treated myself --first with some hydrogen peroxide (dang - that stings) then some peppermint-laced AloeVera cream. It began to sink in that I was indeed quite fortunate to have avoided smashing my bones or having to be taken to the Emergency Room at the hospital, which could easily have happened because I fell so hard and unexpectedly from such a height with such centrifugal force.

Like most wounds in life, these sorts of things take time to heal. Though my abrasions had begun to scab over pretty well, by Monday, I "looked like hell" - like someone had abused me! Even on Tuesday I had plenty of 'splainin' to do among my colleagues at the hospital, each of whom wondered "what happened" with every new encounter.
When Wednesday morning rolled around a major issue was developing in my mind. Here I was, still looking like crap on one of the most important days in my professional career thus far - starting out with a key breakfast meeting to lead regarding a complicated clinical ethics issue to discuss, followed by a visit from the Minister of Health at mid-day. There would be no getting around it: I was the key person to talk with her from our department, and to make little speeches and lead a tour during an event I knew would attract at least fifty others. I considered putting on some sort of make-up, but then realized that would only cake and probably make me look even worse; I'd still still likely feel self-conscious and not really feel like "myself."

Then it occurred to me - I could simply deploy some of that typical Aussie-style self-deprecating humour that tends to distinguish Aussies from Americans! So, thus it was that I introduced myself to the Minister of Health that day: "Hi, my name is Clair, and I'm a recovering.....unicycle rider!"

That instantly released some tension and formality, and warmed things up for both of us! Katy Gallagher responded with a robust, genuine laugh - and what's more, she completely understood and empathized. I knew she would. A doctor/administrator at the hospital and fellow Big Wheel rider and friend, Rod Lambert, happens to be her neighbor. His wife, Anne Cahill Lambert, had told me so a number of months back, and I remembered that fact. She has encountered old fools in their fifties riding around on unicycles before.

I actually had a very engaging and "well-balanced" private chat with her off to the side for five or six minutes during which I was able to share about what we've been up to lately, along with some other program developments I have in the planning stages. Various other members of our team got to meet her and we enjoyed the experience together. I found her to be very personable and perceptive - and, of course, now much better informed about pastoral care and chaplaincy. And I forgot all about how I looked in the mirror - it simply didn't matter anymore.
Just another great example of the extra assets a hospital chaplaincy manager has -- if he rides a unicycle! Plus, a couple of the most basic and vital lessons that one can learn from both of those domains in life were reinforced:
1) It's quite OK to acknowledge failure and show how your own feet are also "made of clay" -- sharing your own humanity can instantly break down barriers.
2) Humor can defuse awkward tension - and transform a failure on its way to a strength.
3) When its all going wrong, try to "land on your feet!"
-Clair de L'uni (a.k.a "Rubber Man")
On the road to recovery - a week later: 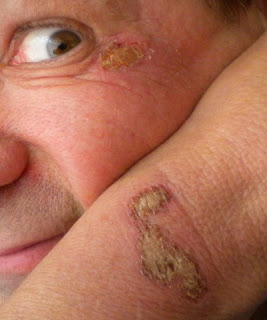