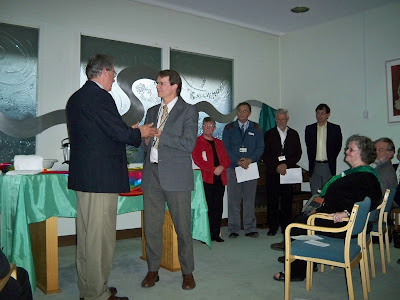 Last evening, Thursday, 25 September 2008, was a very empowering experience for me, especially when, near the end, the entire gathering of 50 some participants in the hospital's Chapel gathered round and laid their hands on me or extended their prayers through others to me in a fantastic web of support and affirmation. Carole Anne and I then closed the service together, just prior to my benediction, by sharing/teaching one of our favorite hymns: "My Life Flows On", in keeping with the River of Life theme (Psalm 46) that was utilized in the service and is depicted visually in the Chapel itself.

I will post on my blog the audio file of that entire 45 minute service which Carole Anne had the foresight to record on our digital recorder (plus include there, later, some other nice pics taken on our digital camera by Jane Barr) if I can figure out how to transform a 10 MB wma file into a more manageable mp3 file.

Here's the copy sent to TCH Public Relations for publishing:

Chaplain Clair Hochstetler is The Canberra Hospital's new Manager of Chaplaincy and Pastoral Care Department, who comes to us after ten years in a similar position with a health system in northern Indiana, USA. Clair was officially commissioned into his new responsibilities during a packed-out induction service Thursday evening 25 September '08, in the Chapel which depicts the theme of the River of Life. Pictured here is Rev. Jim Barr (on the left) of Canberra Baptist Church, a member of the search committee and representing the Ecumenical Churches Council, offering Clair one of four symbols, a digital voice recorder set to "high sensitivity" representing good listening skills. Other symbols were the towel and basin (authentic service to others), the Book (a Bible in both English and another Asian language), and a lantern (holding forth the light, inspiration, and hope in the midst of darkness.)

Also standing are the four other chaplain team leaders at TCH, supported by their respective faith groups and teams of chaplain volunteers - and coordinated by Clair who also leads the General team. They received the symbols from Clair and shared in a litany: Sr. Kathleen Keenan (Catholic), Rev. Arnold Bartholomew (Presbyterian), Rev. Richard Pedersen (Uniting Church), and Rev. Harley Lockley (Anglican.) Seated are Carole Anne, Clair's spouse, and Geoffrey Hunter, chair of the ACT Pastoral Care Board, to which Clair now reports. Also involved were representatives of Baptist Community Services of NSW and ACT (through whom Clair is contracted with ACT Health), other members of the ACT Health and Welfare Chaplains Association, the Ecumenical Churches Council, various members of the the TCH staff and patients/families already touched by Clair's ministry, and members of the Canberra Baptist Church with whom Clair and Carole Anne affiliate.

Now, folks, for another major point of celebration: I got the official word just last week that the leading officer of ACT Health in charge of authorizing the funds to make it happen has actually finally inked the agreement to hire me full time here at this hospital system as of February 1. I'm contracted for 25 hours a week now -- and am continuing part-time in pastoral care consultation & program development with the Canberra Baptist Church until then.

That moves the TCH chaplaincy management position from 15 hrs a week (my predecessor) to 0.6 FTE (now) to 1.0 FT over this space of 7 months, and will then allow me to ramp up at least 50% of my time for direct care of patients/families, which is what I really want.

Walking a bit on the clouds today,
Clair